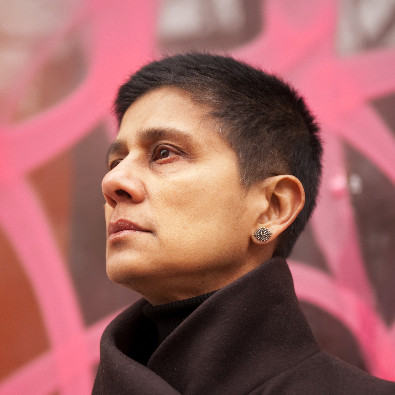 Vocalist Christine Correa is a native of Bombay, India currently residing in Brooklyn, New York.  After relocating to the U.S. in 1979 to attend the New England Conservatory of Music in Boston, Massachusetts,  she soon became involved in a variety of improvisational contexts.

Christine has performed and recorded with artists such as Ran Blake, Steve Lacy and John LaPorta and has appeared at numerous festivals and clubs in the U.S., Europe, South America and India.  She is a member of the Frank Carlberg Quintet and has been featured in many of the group’s releases.  Christine has also been featured on projects by composers Steve Grover, Sam Sadigursky, Nicholas Urie, Guillaume Orti and Laurent Coq.  Christine’s many other collaborators include John Hebert, Chris Cheek, Michael Sarin, Chris Speed, Ben Street, Kenny Wollesen and John O’Gallagher, among others.

Christine has been Director of the Maine Jazz Camp since 1994.  She has given vocal workshops at Sibelius Academy  and Oulunkyla Conservatory (Helsinki), in Buenos Aires and Cordoba (Argentina), Lagos (Nigeria), Windhoek(Namibia), Bowdoin College (Maine), University of Michigan in Ann Arbor and Kalamazoo, among others.