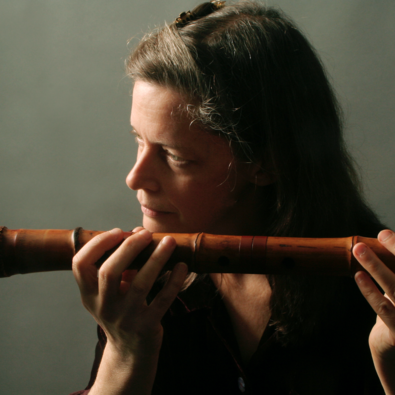 Elizabeth Brown combines a composing career with a diverse performing life, playing flute, shakuhachi, and theremin in a wide variety of musical circles. Her music has been heard in Japan, the Soviet Union, Colombia, Australia, South Africa and Vietnam as well as across the US and Europe, and includes many compositions for traditional Japanese instruments as well as numerous collaborations with artist Lothar Osterburg.

Brown premiered her shakuhachi solo Dialect at the World Shakuhachi Festival 2018 in London; her music has also been featured at shakuhachi festivals in Kyoto, Prague, Sydney, and New York City. She began studying shakuhachi in 1982 and its music has been a major influence on her musical language. She is celebrated both here and in Japan for her compositions combining eastern and western sensibilities. Since winning grand prize in the Makino Yutaka Composition Competition (for Japanese traditional instrument orchestra) as well as a prize in the Senzoku Gakuen Shakuhachi Composition Competition, her music has performed in Japan by Pro Musica Nipponia, Reigakusha, and Orchestra Asia. She writes extensively for Japanese traditional instruments, including recent pieces for Satsuma biwa and percussion, shamisen and cello (commissioned by Duo Yumeno), and shakuhachi and shamisen.