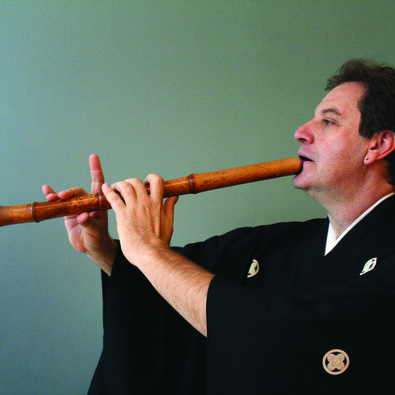 JAMES NYORAKU SCHLEFER is a Grand Master of the shakuhachi and one of only a handful of non-Japanese artists to have achieved this rank. He received the Dai-Shi-Han (Grand Master) certificate in 2001, and his second Shi-Han certificate in 2008, from the Mujuan Dojo in Kyoto. He has performed at Carnegie Hall, Lincoln Center, the Kennedy Center, Tanglewood and BAM, as well as multiple venues across the country and in Japan, Indonesia, Brazil and Europe. Mr. Schlefer first encountered the shakuhachi in 1979, while working towards a career as a flute player and pursuing an advanced degree in musicology at CUNY (Queens College.) Today, he is considered by his colleagues to be one of most influential Western practitioners of this distinctive art form.  In February 2014, Concertonet.com gave him the accolade of “America’s finest Shakuhachi player”.  As a composer, Mr. Schlefer has written multiple chamber and orchestral works combining Japanese and Western instruments as well as numerous pieces solely for traditional Japanese instruments. Mr. Schlefer is the Artistic Director of Kyo-Shin-An Arts and the curator for the Japanese music series at the Tenri Cultural Institute in NYC. He teaches shakuhachi at Columbia University, a broad spectrum of Western and World music courses at New York City Technical College (CUNY), and performs and lectures at colleges and universities throughout the United States. www.nyoraku.com