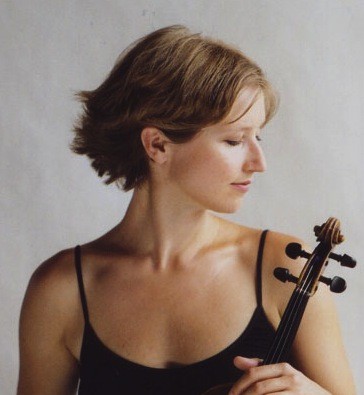 Maja Cerar is a violinist, musicologist, and multimedia creator, currently residing in New York City. Critics have consistently praised her as a "magnificent violinist" with "breathtaking technique" and "a completely natural musicality," an artist who "listens to her inner self."

Ms. Cerar's repertoire ranges from the Baroque to the present and her stage experience, besides solo and chamber music, includes performances with live electronics as well as theater and dance productions. Since her debut in the Zurich Tonhalle in 1991 she has played as a soloist with orchestras in Europe, given recitals with distinguished artists on international tours, including concerts in Paris, Rome, Washington, Chicago, and New York. She has also performed at festivals such as the Davos "Young Artist in Concert," Gidon Kremer's Lockenhaus Festival, the Aspen Music Festival, the ISCM World Music Days in Ljubljana, and the ICMC festival in Barcelona and in Singapore, the "Viva Vivaldi" festival in Mexcio City, and numerous others. She also gave master classes and coached chamber music at the Loca Musica Summer Program in Skofja Loka, Slovenia.

She has a continuing interest in exploring new technologies in relation to music composition and performance. Her collaborative works have been featured at the "Re:New Frontiers of Creativity" symposium celebrating the 250th anniversary of Columbia University, "LITSK" festival at Princeton University, and the SIGGRAPH 2007 multimedia conference/festival in San Diego. In 2014 she was a fellow at the Future Music Lab of the Atlantic Music Festival and she was selected as a workshop artist for the Tribeca Film Institute's Tribeca Hacks program. In the fall of 2015 she was a guest artist with the NYU New Music Ensemble, and in 2016 she was chosen to be the featured performer at the New York City Electroacoustic Festival (NYCEMF).

After her Matura from the Hohe Promenade Literary Gymnasium in Zurich (type B, Latin), Maja Cerar graduated with honors from the Zurich-Winterthur Conservatory where she studied under Aida Stucki-Piraccini and earned a Teaching Diploma (equivalent of BFA) "with distinction" and a Concert Diploma (equivalent of MFA) "with distinction." She also took master classes with Zakhar Bron, Franco Gulli, Igor Oistrakh, and Igor Ozim. From 1995 to 2001 she polished her performance further, studying with Dorothy DeLay and Kurt Nikkanen in New York City. Concurrent with these studies and her continued performance career, she enrolled in the graduate program at Columbia University, where she earned her Master of Arts, Master of Philosophy, and Doctor of Philosophy degrees in Historical Musicology (dissertation on Schubert's late string quartets; Advisors Profs. Walter Frisch and Joseph Dubiel). During her studies, Ms. Cerar received fellowships from Columbia University and scholarships from the Swiss Study Foundation, the Migros Foundation, the Swiss government, and was the recipient of other numerous grants and awards. For more information, please visit www.majacerar.com.