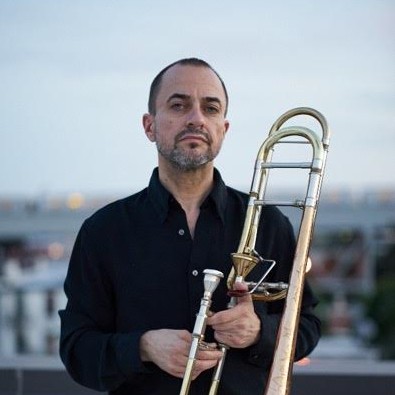 Originally from Los Angeles, NYC-based trombonist Michael Seltzer performs with a wide variety of artists & ensembles covering a diverse range of styles; including contemporary, classical, popular, world, and jazz. He has worked with artists including Sting, Lenny Kravitz, Mos Def, Bernadette Peters and David Byrne. He has performed internationally in many of the world's major concert halls and festivals, is on the faculty of Columbia University, and has performed on and produced recordings which have received international critical acclaim. He is a multiple-time Grammy award nominee/winner with numerous ensembles, and has performed extensively on Broadway. He is solo trombonist for the cross-genre chamber orchestra-cum-world music band, Absolute Ensemble, as well as the Manhattan Brass, and has recorded and toured extensively with both groups. Orchestras include the Orchestra of St Luke’s, St. Paul Chamber, American Composer’s Orchestra, American Symphony, NY City Ballet & Opera, NY Pops, Metropolitan Opera, the Knights, and internationally from Sarajevo to Adelaide, Australia’s Symphonies. Additionally, he has recorded for television and ﬁlm, and has performed and recorded contemporary music with groups such as Bang-on-a-Can Marathon, and the ST-X Ensemble Xenakis.

He has performed with the New York Collegium and the American Classical Orchestra; New York's acclaimed period orchestras, and also enjoys solo performance, appearing in recital at the Caramoor Festival's winter 'Artist Spotlight' series and for Lincoln Center’s ‘Meet-the-Artist’ series.

Mr. Seltzer has been a panelist for Chamber Music America's National Conferences and has been a guest clinician/lecturer at many esteemed institutions including The Juilliard School, Princeton University, the Curtis Institute, UCLA, Indiana University at Bloomington, Temple University, and the Hochschulen für Music in Bremen and Stuttgart, Germany among many others. He did doctoral work at New York University and received degrees from California State University, Northridge and Manhattan School of Music. He has designed educational programs for Midori & Friends, the Fischoff Chamber Music Society, and the Manhattan Brass, of which he is a founding member.