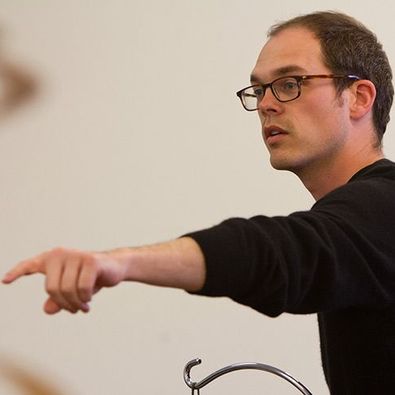 Percussionist Mike Truesdell’s solo and chamber-music opportunities have brought him across the United States, Europe, and Japan. As a soloist, he was the 2nd-prize winner of the 2010 TROMP International Percussion Competition in the Netherlands. He maintains an active schedule of solo recitals, chamber music and orchestral performances. In addition, Truesdell has performed with numerous ensembles, including the New York City Ballet, New York New Music Ensemble, Lucerne Festival Ensemble conducted by Pierre Boulez, and with members of the New York Philharmonic, Metropolitan Opera, Chamber Music Society (New York), ICE, and Alarm Will Sound. In late 2011, he was featured as a soloist and ensemble member in a concert celebrating the late Elliott Carter’s 103rd and final birthday, with the composer in attendance. He performed for Charles Wuorinen’s 75th birthday, with the composer conducting.

Truesdell has also been involved in a Miller Theatre Composer Portrait commemorating John Zorn’s 60th birthday, multiple performances with the New York City Ballet, a tour with the Talea Ensemble performing music of Pierluigi Billone, a concert of music by Charles Wuorinen and George Crumb at the Kennedy Center, and performance/master class tours to Japan and China during the summer.

As an educator, Truesdell is on faculty at Rutgers University as an adjunct professor of percussion. During the summer months, Truesdell is a regular faculty member at the Zeltsman Marimba Festival and the nief-norf Summer Festival (collegiate-level chamber music and scholarship). He is also the founder and artistic director of the Wildcat Percussion Camp for middle and high-school percussionists. Truesdell is an active teaching artist in schools ranging from elementary to university. His subject matter ranges from world percussion to instrument-making to contemporary solo and chamber music. In the spring of 2013, he was acting lecturer of percussion at Lawrence University in Wisconsin, where he taught private and group lessons, as well as coached chamber music and directed the percussion ensemble. Truesdell also maintains an active private studio of students ranging from 16-60 years of age.