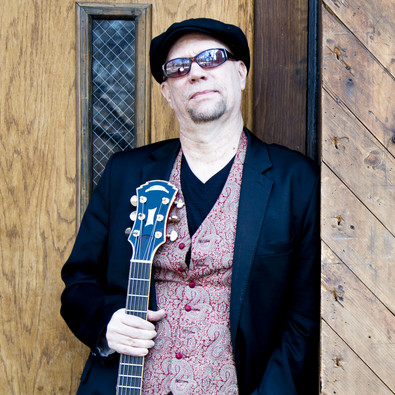 Guitar master George Benson, a long-time supporter, has described Bollenback’s work as ". . .bona-fide playing, unambiguous, up-front and powerful," calling him “a versatile dynamo on guitar. His approach to jazz and blues has a uniqueness unto itself . . ..”. That comment has special resonance in that Bollenback counts Benson high among his wide range of influences; these also include Carlos Santana, Wes Montgomery, Kenny Burrell, John McLaughlin, Johnny Winter, and Jimi Hendrix (among guitarists), as well as such giants of improvisation and composition as pianists Herbie Hancock and Bill Evans, and saxophonists Wayne Shorter and John Coltrane.

Born just outside Chicago, Illinois in 1959, Paul Bollenback was raised in Hastings-on-Hudson, NY, just outside NYC. Bollenback got his earliest musical nudge from his father, a classically trained trumpeter who first provided the 7-year-old son with a nylon-string guitar – and then provided a new world of inspiration. The elder Bollenback, a scientist, relocated the family from New York to New Delhi, India when Paul was 11, and it was there that he cultivated a life-long interest in exotic musical sounds and timbres that remains evident in even his most jazz-based work. When the family returned to New York, Paul's father bought him an electric guitar and, like just about every other young guitarist in the 60s and 70s, Paul started gigging in local rock-and-roll bands – until he heard Miles Davis for the first time, which refocused his energies into jazz fusion.

Relocating again in 1975 from New York to Washington DC, Bollenback began to study and perform both straight-ahead jazz and fusion. He majored in music at the University of Miami, then studied for eight years with Baltimore-based professor of Theory/Composition Asher Zlotnick. In 1987 he made his recording debut on saxophonist Gary Thomas’s Seventh Quadrant (Enja), and in 1990 established a working relationship with the young organ legend Joey DeFrancesco, an association that has lasted to this day, and producing 18 recordings.

In 1991 Bollenback’s compositions "Wookies' Revenge" and "Romancin' the Moon" (featured on DeFrancesco's Columbia Records release Reboppin') were honored by SESAC with that organization’s award for original composition. In 1993, a grant from the Virginia Commission on the Arts and the National Endowment for the Arts resulted in the composition "New Music for Three Jazz Guitars." In 1997, Bollenback was named Musician of the Year at the Washington Area Music Awards. That year he returned to New York City, where he now lives.

Bollenback's range and impressive discography as both sideman and leader speak for themselves. His two releases on Elephant Dreams Records "Brightness of Being" (ED4548) & "Invocation" (ED4550) remained on the USA Jazz Week charts for several months in 2007 and 2008 consecutively. "Invocation" was voted onto Downbeat's Top 100 releases of 2008 and received wide critical acclaim in the international press garnering 4 and 5 star reviews in Jazz Times Magazine among others.

In 2011 Bollenback garnered a Grammy nomination for co-production on Joey DeFrancesco’s Never Can Say Goodbye (Hi Note), and also shares executive and co-producing credits with vocalist-composer Chris McNulty on her albums Dance Delicioso and her Whispers the Heart (Elefant Dreams). His international and national touring schedule currently include appearances with Joey DeFrancesco, Mike LeDonne, Jeff "Tain" Watts, Gary Bartz, and Shunzo Ohno, as well as many appearances with his own trio.

Bollenback also leads a dual life as an educator, with a long career teaching jazz at Columbia University, Peabody Conservatory, and Queens College, as well as the Litchfield, Skidmore, Prague and Bobby Durham summer jazz workshops. He recently began duties at Prince Claus Conservatory in the Netherlands.

His latest recording on Mayimba Jazz Music "Portraits in Space and Time", featuring all original music in a trio setting, was released to critical acclaim in 2014.