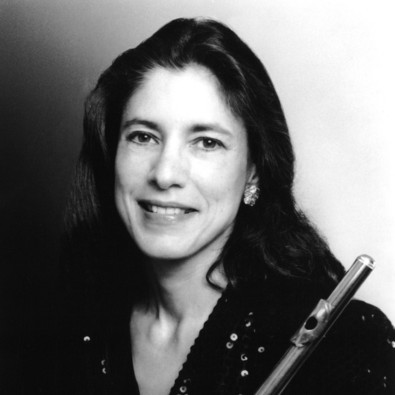 Throughout her career, flutist and chamber musician Sue Ann Kahn has been hailed as a consummate interpreter of music of all styles.  She was honored with one of the first Solo Recitalist Fellowships from the National Endowment for the Arts in recognition of her outstanding gifts as a flutist and received the American New Music Consortium award for distinguished performances of contemporary music.

She won the coveted Walter W. Naumburg Chamber Music Award as a founding member of the renowned Jubal Trio, and she performs with the League of Composers Orchestra and other ensembles in major concert halls throughout the United States.  Ms. Kahn presents recitals of unusual interest and has received consistent critical acclaim for her recordings for CRI, Musical Heritage, MMG, Vox-Candide, New World, and, most recently, The Mozart Flute Quartets for Albany Records.  She presents masterclasses on various aspects of the flute and its music throughout the United States.

A former faculty member at Bennington College, Ms. Kahn taught flute and chamber music at Mannes College the New School for Music for over fifteen years and also directed its Pre-College Program. She now teaches flute and chamber music in the Music Performance Program at Columbia University and performs and coaches at the Chamber Music Conference and Composers' Forum of the East. An active advocate for the flute and its music, Ms. Kahn has been president of the New York Flute Club and a long-time member of the Flute Club Board of Directors. Ms. Kahn was President of the National Flute Association in 2005.