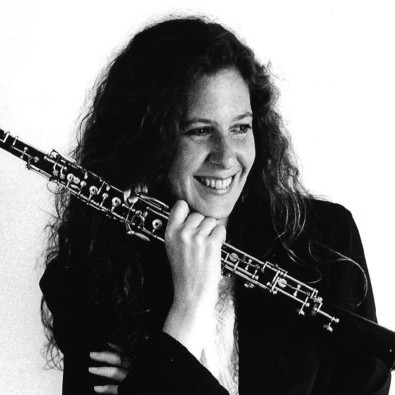 Vicki grew up in Brooklyn and has been a part of New York City’s music scene since the age of 11. She is solo oboist with Orchestra New England, the Music Project, Musical Elements, Arcadia, Ufonia, Sarau Brasileira, with John Zorn and, formerly, the Broadway shows Beauty and the Beast, The Secret Garden, King David and Villa Lobos Magdalena at Lincoln Center. She has appeared numerous times as a soloist on national public television, network and cable television including on MTV as well as on NPR, New York's WQXR, WNCN, and WBAI and is a featured soloist in the music that is heard at the Pearl Harbor Memorial. In addition Vicki has premiered many solo, chamber music and orchestral works, including works written specifically for her. Her groups have been resident chamber ensembles at many of NYC’s chamber music halls including Merkin Hall and Kaufmann Concert Hall and she has also performed at such new music venues as Roulette, the Kitchen, La Mama and the Knitting Factory and has toured extensively in the US, Canada, Europe and South America.

She has performed at the Aspen, Norfolk, Waterloo, Oregon Bach, Bang On a Can, Next Wave, Ives, White Mountain, Princeton Chamber Music, Yale Starlight, Virginia Arts, Rome, Seville and Caramoor festivals and at the International Arts and Letters Festival in New Haven with Terence Blanchard and Spike Lee.

Vicki studied at the Juilliard School and is on the oboe and chamber music faculties of NYU and Columbia University. Along with her private teaching she has also been the oboe professor at Wesleyan University and the University of Bridgeport, has taught master classes in Italy and Brazil and is currently invited to teach again in Italy, Brazil and Germany.

In her teaching she incorporates elements of Alexander Technique and other perspectives on breathing and body use along with her experience in a wide range of performance and musical situations.