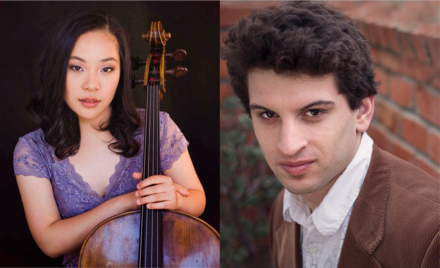 Elena Ariza is a cellist from Cupertino, California and currently attends Columbia University as part of its exchange program with the Juilliard School. In 2015, Elena performed as a soloist at Davies Symphony Hall with the San Francisco Symphony Youth Orchestra, and in the same year, was featured on NPR’s From the Top. She is an alumna of the San Francisco Conservatory of Music Pre-College as well as the San Francisco Symphony Youth Orchestra, for which she served as Principal Cellist for two years. Currently, she serves as Co-Principal at the Columbia University Orchestra, and in 2017, performed under Michael Tilson Thomas as a substitute member of the New World Symphony.

In 2011, Elena helped raise more than $12,000 through three charity concerts that she and her friends organized in the San Francisco Bay Area, in order to help the victims of the earthquake and tsunami in Japan. Since then, she has performed in several concerts to benefit the Leukemia & Lymphoma Society, Japanese Red Cross, Global Giving, and the Transparent Fish Fund.

At Columbia University, Elena is currently pursuing a computer science major and studies under the tutelage of Richard Aaron at Juilliard. In her spare time, she enjoys paper crafting and playing chamber music with her violinist brother and her mother, a pianist.

Born to a family of musicians, Misha Galant began piano lessons at the age of six and continued for fourteen years with his mother, Olya Katsman. Misha is a junior in the Columbia University and Juilliard School Exchange. Currently, he studies with Dr. Matti Raekallio at the Juilliard School and with Dr. Yu-Jane Yang at Weber State University in Utah. He is the winner of numerous competitions and has performed with the Fort Worth, Rochester, Utah, Oakland, Peninsula, Livermore, Santa Rosa Youth, and California Youth symphony orchestras. In the summer of 2016, he went on tour of Austria and Italy with the California Youth Symphony, where he performed Gershwin’s Rhapsody in Blue. Misha is one of ten students nationwide to receive the Chopin Scholarship from the Chopin Foundation and was a prizewinner at the first inaugural Van Cliburn Junior Competition and at the Eastman Piano Competition. Misha is indebted to Sharon Mann and Yoshikazu Nagai of the San Francisco Conservatory of Music for their invaluable and inspirational coaching. In his spare time, Misha enjoys playing chamber music, swimming, reading, hiking, eating, and performing to raise funds for various volunteer organizations.