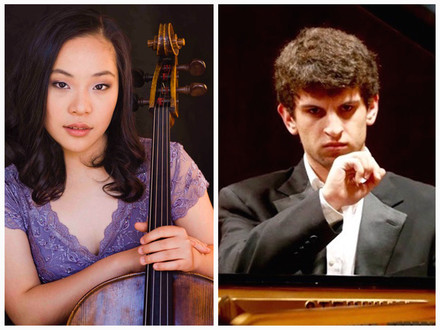 As a chamber musician, she has participated in the San Francisco Conservatory of Music Chamber Music Program since 2008 and most recently played in the Cambiata String Quartet, which competed in the Fischoff Chamber Music Competition in 2016. She also played in the AYE Piano Trio as part of the Young Chamber Musicians program, led by Susan Bates.

In 2011, Elena helped raise more than $12,000 through three charity concerts that she and her friends organized in the San Francisco Bay Area, in order to help the victims of the earthquake and tsunami in Japan. Since then, she has performed in several concerts to benefit the Leukemia & Lymphoma Society, Japanese Red Cross, Global Giving, and the Transparent Fish Fund. In her free time, she enjoys computer programming and paper crafting.

Misha Galant is a sophomore in the Columbia University and Juilliard School Exchange in New York City. He began piano lessons at the age of six and continued for 12 years with his mother, Olya Katsman. Currently, he studies with Matti Raekallio at the Juilliard School. Misha’s musical heritage includes three generations of pianists, including his great-grandmother who was a student of Maria Yudina along with Vladimir Horowitz, and his great-grandfather who studied with Heinrich Neuhaus in Kiev, Ukraine.

In June 2010, at the age of 12, he gave his first full solo recital in Mountain View and has been performing regularly since then. As a member of the Young Artist Guild, he is in great demand as a recitalist around California.

In the summer of 2015, he was a prizewinner in the first Van Cliburn Junior competition in Fort Worth, Texas, garnering the Best Classical Sonata Performance and Audience prizes. He also won Third and Audience prizes at the Eastman Young Artists International Competition for which he was offered a four-year full tuition scholarship to the Eastman School of Music.

Misha transferred high schools in his junior year, but continued to serve as an accompanist for both of his schools’ choirs. He was also a member of the Music Students’ Service League, an outreach program that gives benefit concerts in retirement communities. In his spare time, Misha enjoys playing chamber music, swimming, reading, hiking, eating, and performing to raise funds for various volunteer organizations.

Misha is indebted to Sharon Mann and Yoshikazu Nagai of the San Francisco Conservatory of Music for their invaluable and inspirational coaching.