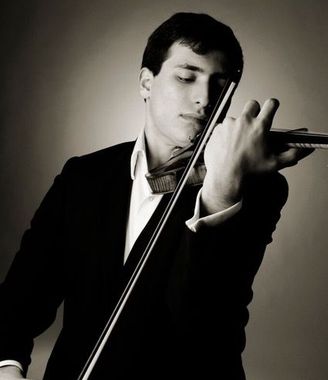 Dalit Warshaw received a 2016 Guggenheim Fellowship in composition, and was the first composer recipient of a MM and DMA through the Barnard-Columbia-Juilliard Exchange. She will present an evening of music and prose centered on a Polish-Jewish-American theme: Carol Hebald will be reading from her newly published novel, A Warsaw Chronicle, and Warshaw will present two newly composed works, inspired by her own very profound experience performing on tour in Poland in March 2016 with SPEAKmusic.

Joseph Morag will premiere Conflagration, a chaconne based on the Yiddish song "Es Brennt" for solo violin. This song, written in 1938 by Mordkhay Gebirtig in response to a Polish pogrom, describes the burning of a Jewish town, and became a prophetic song of the impending Holocaust. It is due to Joseph, one of the wonderful musicians I'd met and performed with in Poland (as part of the ensemble SpeakMusic), that this piece now exists, and I am thrilled that he will be premiering it!

I will then perform Godowsky's left-hand piano arrangement of Chopin's F minor Etude (from the Trois Etudes, Op. posthumous), followed by my new left-handed musical response, entitled Labyrinth. It shall be my debut as a left-handed pianist, and I am most excited!

More information can be found at https://www.facebook.com/speakmusicnyc/?fref=ts.