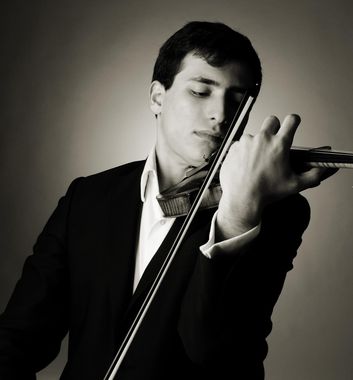 What year are you at Columbia?

What are you planning on majoring in?

I'm hoping to major in music and physics with a concentration in mathematics.

How long have you been a participant of the MPP?

I've been a part of MPP since the first day I set foot on campus as a student.

How have you benefited by MPP programs and performance opportunities?

Being a member of the CUO and working under Maestro Milarsky has contributed enormously to my growth as a musician.

Any tips on how a student might be able to fully take advantage of all the musical offerings at Columbia?

As a non-conservatory environment, Columbia offers opportunities off the normal beaten path. Last year, I played two hours of completely free improvised music for a CSArts event, something I would never have thought myself capable of doing. Always remember that almost any conceivable musical interest, from contemporary to jazz to traditional world music, can be explored at Columbia. And if what you want to pursue isn't offered, you can always find students interested enough and professors devoted enough to turn your interest, no matter how vague or unheard of, into a standard at Columbia.

How do you balance your busy academic schedule with practice time? any tips?

It's impossible, at least for me, to hold to a completely regimented work schedule 24/7. The desire to procrastinate and to spend time away from work is completely natural and should not remain constantly unfulfilled. That being said, two majors, a concentration, the core, an outside orchestra, and assorted gigs and concerts make it difficult to take breaks. To get around this unavoidable aspect of college life, I combine productivity and procrastination into the same activity. If there's a paper I don't want to write, I do a physics problem set. If that problem set has remained unsolved after 7 straight hours because of its absurd level of difficulty and looking at it for any longer will make my brain disintegrate, then I practice. If my hands refuse to move, I do some reading. Always make sure to put off the work you don't want to do at the moment with something equally productive, just less horrible.

What was the most memorable musical experience in your life?

Once, on a youth orchestra retreat, we were rehearsing Ravel's Daphnis et Chloe in a room with enormous glass windows. The retreat was in the mountains of upstate New York, isolated from phone service, internet, the city; all of civilization. It was cloudy when we were rehearsing the sunrise moment in the suite. The lake outside our windows looked grim and forbidding, covered in fog, a dreary and inaccurate picture of the glorious sunrise we were trying to portray. The more times that we tried and failed to play the passage, the gloomier the landscape became. The one time we did manage to execute it well, however, the sun, in a million to one coincidence, shone through the clouds, mirroring what we had just played. The experience inspired me to believe that music is really a powerful force in the world.

What does making music mean to you?

Classical music, for all of its profundity and grandeur, is to my mind still a form of entertainment. To me, making music does not mean slavishly following the instructions of the composer to the letter, but making decisions that I believe will be most convincing to my audience and myself.

My favorite quote is, befitting my dual major, from Einstein:

"You have to learn the rules of the game. And then you have to play better than anyone else."

That was what I put in my high school yearbook, but it took on a completely new meaning when I got to Columbia. University is an entirely new game with rules I was totally ignorant of. But I learned and adapted my playing strategy, as most everyone who has the tenacity to get into Columbia will do. However, there is not just one "game" which all of our students play to win. Trying to beat all of one's classmates at university life is a futile and disheartening exercise. Rather, everyone at Columbia makes a unique game with its own rules. Those who succeed here are the ones who play their own game better than everyone else.