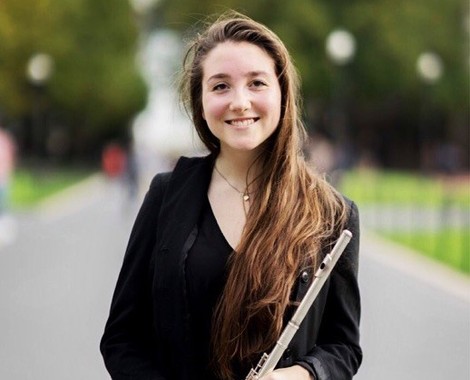 What year are you at Columbia?

I am a sophomore!

What are/will you be majoring in?

How long have you been a participant of the MPP?

Ever since setting foot on campus freshman year!

How have you benefited by MPP programs and performance opportunities?

In a few words, the MPP is constantly buzzing. It’s a close-knit unit that fosters such a devoted, active and intellectual music community. The MPP offers a conservatory-like model that not only blends with, but complements Columbia’s academic vigor; it’s the best of both worlds. There’s always a different ensemble, class, concert, or gig to experience; and being exposed to such a diverse range of these can open one’s eyes to so many worlds within music, from chamber to Japanese court music to CMC. The MPP has opened me to extraordinary performing opportunities through lessons, chamber, CUO, choir, etc., leading to performances in some of the city’s most premier venues. Playing chamber and the unique communicative elements there in particular continually impact my methodology of approach and perception. I’ve had two phenomenal chamber coaches thus far, and having frequent exposure to learning under such limitless and innovative minds is tremendously exciting. Each MPP experience brings with it new perspectives, ideas and dimensions of understanding music, which constantly feed and expand my musicianship.

Any tips on how a student might be able to fully take advantage of all the musical offerings at Columbia?

In my experience, it is very easy to come across one music group after another and want to join them all. Columbia has such a vast array of interesting scenes to get involved in (which have the best of the best opportunities within each), so it is tempting to become part of as many as physically possible. But this can quickly invite overload and consequently spreading out too thin. While it’s wonderful to consider all the exciting opportunities at hand, I’ve found that a wise way to fully take advantage of the musical offerings here (while enjoying rather than juggling them) is to concentrate on one, two or a select few at a time, and try out other things in between or in ways that don’t necessarily sweep up large amounts of time. It’s easy to think that fitting in as many things as possible at once during your time at Columbia will give the “full experience”, but you want to be able to fully enjoy them too; I’ve found it’s better to spread them out, and be able to say “I’m focusing on this now, and picking up that later.”

How do you balance the busy academic schedule with practice time? Any tips?

I view my practicing as a meditative period of sorts. It’s a time I get to stop running around, let my body and mind catch up with me, and truly reflect on what I’m doing and where/how I can improve. I can purely listen to myself, and feel my mind and body connect. You’ll often see me carrying my flute around, as I try and stop by the practice room in between classes or engagements, even if only for a little bit. Like studying, I find playing in little pockets of time spaced out rather than for hours and hours at once most effective for me. And, though Columbia fosters a conservatory-level music pursuit, the demands of academics, extracurriculars, etc. can make it difficult to fit in practice time; you really have to make a point of carving it out, as there’s just always something to do. But, if anything, it sharpens time-management skills, as I’ve had to mentally schedule and delegate my time accordingly.

What was the most memorable musical experience in your life?

I’ve had many memorable musical experiences thus far, but performing at St. John the Divine last winter as part of an event called "Refuge in Music" held in response to divisiveness really impacted me. It was a call for musicians in the area to come play an all-Requiem program with no rehearsal. The spontaneity highlighted music’s potential to mesh both heart and mind: one of the few circumstances where both can fully work in tandem. The pastor’s final remarks before the downbeat stuck: ”Let making music be a model for how we live, where every single person is included, and all come together as one." I was struck by the unified attentiveness; never before had I felt so synchronized with those playing around me. I became aware of many layers of intimacy vibrating at once: between myself and the orchestra, orchestra and conductor, orchestra and audience, myself and audience…we were all immersed in this conversational body of sound, listening, engaging and finding our places in the waves as they moved from clash to consonance and back. It was as if time was sedated (and the seemingly infinite time delay of the reverb helped with that!), with the soundscape continuously growing from one sonority to the next. It was the kind of sonic expansion you could internally feel; its energy and buzz permeated me, somehow both warm and chilling. To perform in a space of such physical, historical and spiritual enormity coupled with this emotional musical fellowship, especially when nestled in the nucleus of the orchestra, felt like an out-of-body experience. It highlighted that sound is an area tangible to humans where the world’s contaminations have no place; the energy is purified.

What does making music mean to you?

Music is my spirit’s medium; it is how I think, feel, and what drives me to act. The Northport school district’s acclaimed music program in which I grew up instilled my strong passion for pursuing music, and inspired me to do it my own way. It’s also where I was introduced to my connection with the flute. It’s meditative in that it’s the closest thing to singing; the idea of using breath to vivify an instrument, fueling it with personal thoughts and emotions all through air, is riveting to me. I’ve been singing as long as I’ve been playing flute, and I apply choral techniques to how I use my air. I also inform my flute performance with other areas within the arts, such as ballet. Dancing ballet has heavily influenced the way I move and think about motion in music. Both music and dance involve constantly manipulating the spatiotemporal plane, with each moment bringing new movements and vibrations. It’s all a spiritual experience for me, as it propels me to another place between here and “somewhere else”.

I’m also fascinated with the composer-performer-listener relationship. I’ve been in all these roles, each providing a distinct lens from which to absorb the music: the performer tells a sonic story that opens a window into the composer’s imaginative world, which somehow touches the fabric of everyone's lives differently. I think this connection has a strong potential power; we may not always know how far it goes, but we know it does. One of the greatest feelings is when a stranger in the sea of listeners comes forward to share with me where the music went in them. I’ve experienced this in various settings: birthday celebrations, funerals, grandiose concert halls, ancient cathedrals, intimate church sanctuaries, nursing homes, a vintage bandstand from the 50s…these moments accent in my mind my passion for sharing music, and my insatiable curiosity for all the places it can go (and how it gets there). I believe this line of communication between composer, performer and listener is integral to any of these musical environments. Music is just such an adaptable art form…all you need are humans, instruments and a space, and the rest just flows.

Anything else you would like to share with the readers? (fav food, fav composer/musician, music recommendation, summer activities, fav quote, etc.)

I love tea, so much so that I maintain an active membership with “The Republic of Tea”. I have many favorite composers: for flute pieces J.S. Bach, Prokofiev, Rouse, etc. (never ends), for ballet music Tchaikovsky/Stravinsky, for choral music Ola Gjielo/Daniel Elder, and for film music Ennio Morricone/Dario Marianelli. My favorite fl(a)utist is Maria Piccinini. I’m an old soul, so I love movies from the 30s/40s, i.e. Strike Up the Band, To Have and Have Not, Easter Parade, etc., and Barbra Streisand’s movies. Current music recommendation is the film score to Prospero’s Books by Michael Nyman that I first heard when set to a new ballet premiered at the NYCB Fall Gala (I usually listen to a film’s soundtrack before I see the film). Dance and especially ballet have been part of me for fifteen years, whether it be dancing myself or watching. Though I eventually switched my main focus to music, intensely pursuing ballet and all that came with that significantly shaped me into the person I am today. I enjoy composing (you can often find me in Hungarian doing this), and also enjoy acting; my favorite role was playing a hot-headed CEO in a murder mystery. During summers, I’ve traveled with choirs to England/Scotland, Switzerland and Italy as of this coming May. I also specialize in music of Taizé, which are services of meditative chamber music and chant by candlelight. I’m a band kid at heart, and was a Drum Major in my high school’s 300-person marching band. I have many favorite quotes, but one that defines much of my philosophy is “Live light, travel light, spread the light, be the light.” Another one I go by is Sadhguru’s quote: ”In order to live totally, when we are here, we must experience all aspects of life and go.”